Pictures Under the Palms 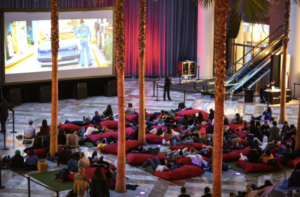 If last week’s arctic weather was any indication, we’re in for a few months of perfect movie weather. Skip the at-home Netflix and come chill with comfy furniture, free popcorn and a pre-film DJ set followed by an eclectic selection of blockbuster hits and indie favorites (including winter olympic-inspired picks)!

Arts Brookfield has listened to New York’s cinema lovers and is bringing back the Pictures Under the Palms series to the Winter Garden at Brookfield Place beginning Tuesday, January 23 and running on the following consecutive Tuesdays through February 27.

Cozy up and unwind with your favorite films indoors under the Winter Garden palm trees. Kick the night off right with free popcorn, comfy seats, and a pre-show DJ set by Tim Martell  at 5:30 PM, followed by a 7 PM movie screening of Crouching Tiger Hidden Dragon. The film is rated PG13 and run time is 2 hours.

Synopsis: Two warriors in pursuit of a stolen sword and a notorious fugitive are led to an impetuous, physically skilled, adolescent nobleman’s daughter, who is at a crossroads in her life. Starring Yun-Fat Chow, Michelle Yeoh, and Ziyi Zhang.

Save the Date: One of our favorite events in Lower

Save the Date - Join The Battery Conservancy’s C